A report put out by environmental think tank Ceres, the lobby group WWF, David Gardiner and Associates and Calvert Investments stated that major companies in the Fortune 500 list are collectively saving US$1.1 billion every year by using renewable energy.

Some of the companies are saving hundreds of millions of dollars per year by taking advantage of renewable energy.

Here are some of the companies and their annual savings:

The report also stated that, as of last year, AT&T has installed 11MW of renewable energy. Hewlett-Packard purchased 13 per cent of its electricity from renewable sources in 2012, while IBM saved about $477 million from efforts to conserve energy.

The report also concluded that Wal-Mart and Dell could save about $1 billion each through similar efforts.

The same companies listed above have also reduced their carbon dioxide (CO2) emissions by 58.3 million tons, which is equal to retiring about 15 coal-fired power plants.

To learn what energy efficient options are available for your business or facility, Call our office today to arrange a complimentary facilities audit with an energy savings expert at 913.310.0705. There are numerous ways to start saving money and have a positive impact on the environment at the same time. 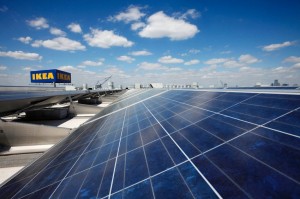